A COLLECTION WITH 3 THRUSTS

Glass differs from other materials because of its very particular physical and chemical properties.

Its viscosity varies as a direct function of its temperature: although fluid when melted (approximately 1400 °C for an ordinary glass), it becomes gradually pasty as it cools (to about 800 °C) before finally becoming an elastic solid at ambient temperature.

The window of time during which glass retains a pasty consistency which enables it to be shaped is called the working period: this varies depending on the composition of the glass, which may make it more or less sensitive to a variation in temperature, and also more likely to become malleable again after being briefly heated.

With its remarkable plasticity, it can then be fashioned by hand, poured, pressed, drawn out, laminated, blown or glued. By about 500 °C, it starts to solidify and snap.

Up until the end of the 19th century, all glassmaking was artisanal, in terms of both the manufacturing processes and the ways in which it was fashioned and decorated.

Achieving a fine glass has always called for the raw materials to be measured and mixed as precisely as possible. In addition, firing them requires controlling a whole series of parameters, including the temperature and the atmosphere in the furnace.

Accordingly, glassmakers have always striven to perfect their firing furnaces.

The end of the 19th century saw a real revolution in their design. The traditional pot furnaces were superseded by a new invention: tank furnaces, initially for mass production (window glass, flasks, bottles, etc.) and even, these days, for luxury articles.

In artisanal glassmaking, the glass was melted in pot furnaces. These were round or elongated in shape, with a dome on top, and equipped along the walls with firebrick crucibles or pots accessible through little windows or openings to enable the raw materials to be added, the firing to be supervised and the glass to be taken out.

The size of these furnaces increased constantly, reaching up to 20 pots. The considerable strides made in improved furnace performance over the course of the 19th century would enable the mass-production industries to use pots with a capacity of close to 2 tonnes. 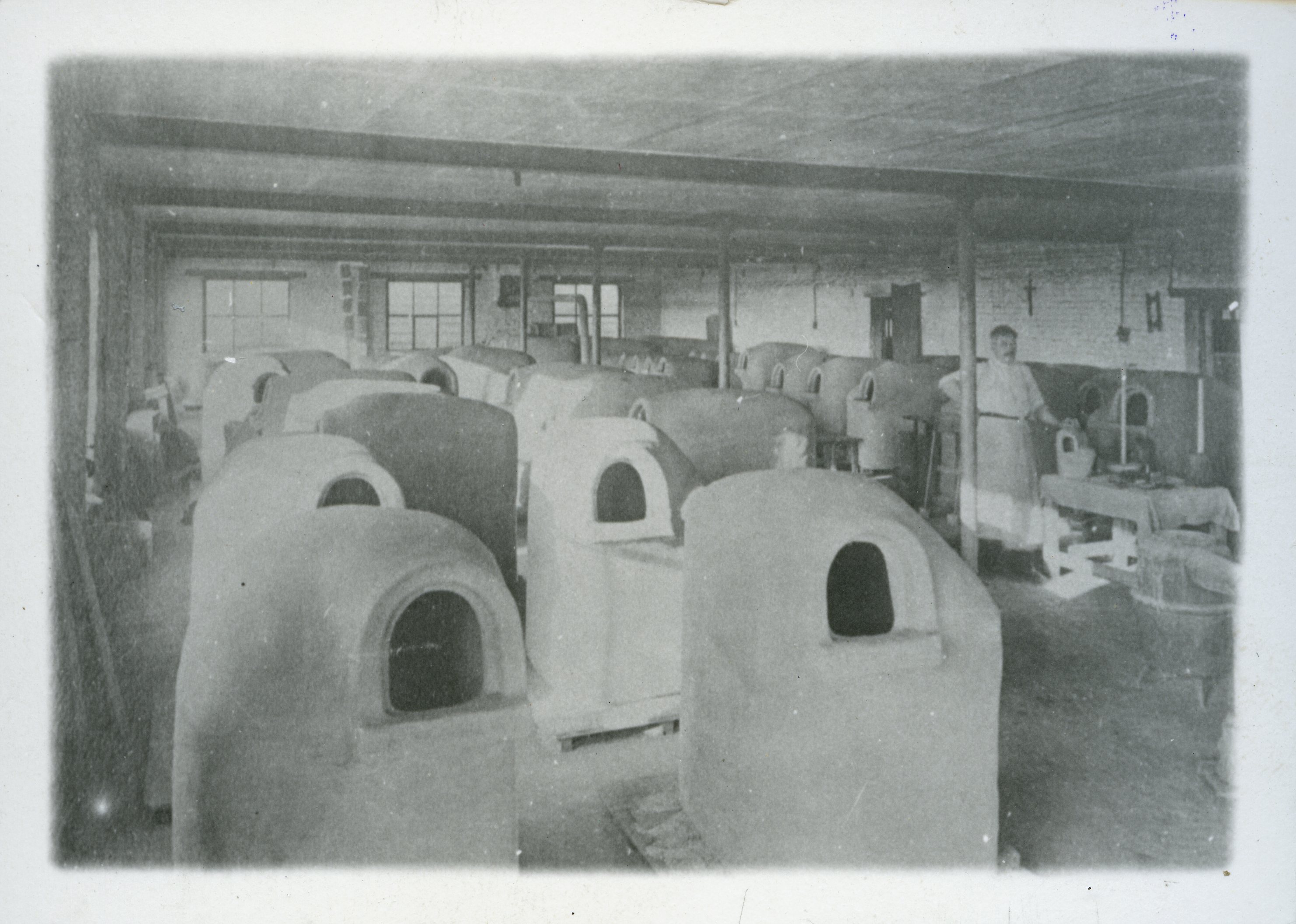 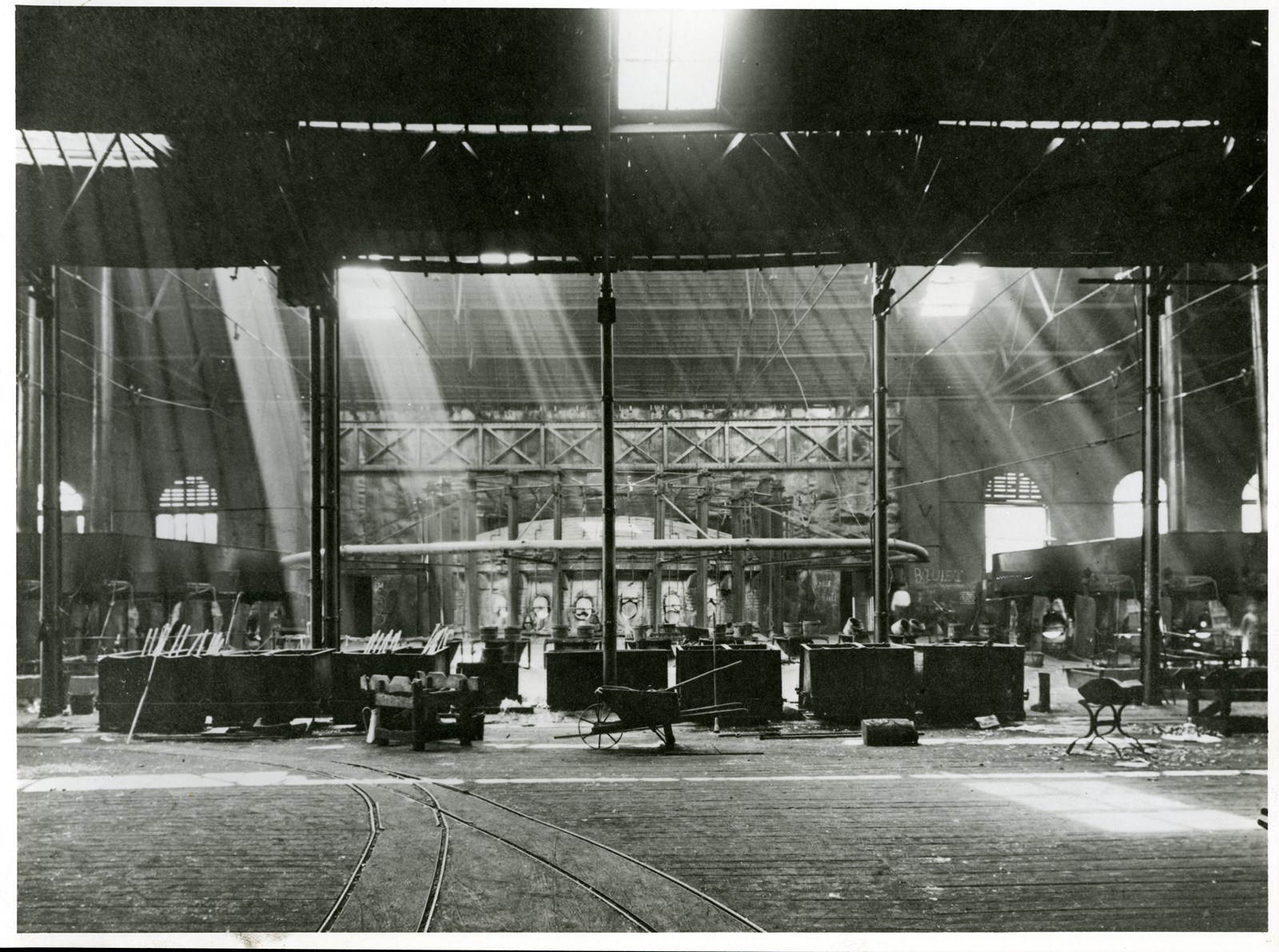 The composition is melted in a big tank of firebricks heated laterally by burners.

The smaller versions are only 6 tonnes, while the biggest, the enormous ones which are veritable swimming pools almost 50 metres long by 10 metres wide by 1.5 metres deep, can hold up to 2500 tonnes of glass.

As from the last quarter of the 19th century, manufacturing plants using substantial tonnages of glass (bottles, and then window glass) began to adopt this much more economical principle, which unlike pot furnaces, provided a continuous flow of molten glass.

For centuries, blowing was virtually the only process used to fashion large glass products, which were classified into stemware (tableware, bottles and flasks) and flat glass (window glass and mirrors).

This distinction became firmly established thanks to the specialisation and geographical concentration of the glassworks, a process which grew ever more pronounced in Belgium in the mid-19th century

In every sector, hot shaping was accompanied, after annealing, with cold processing work for the purpose of decorating the product or giving it specific qualities. 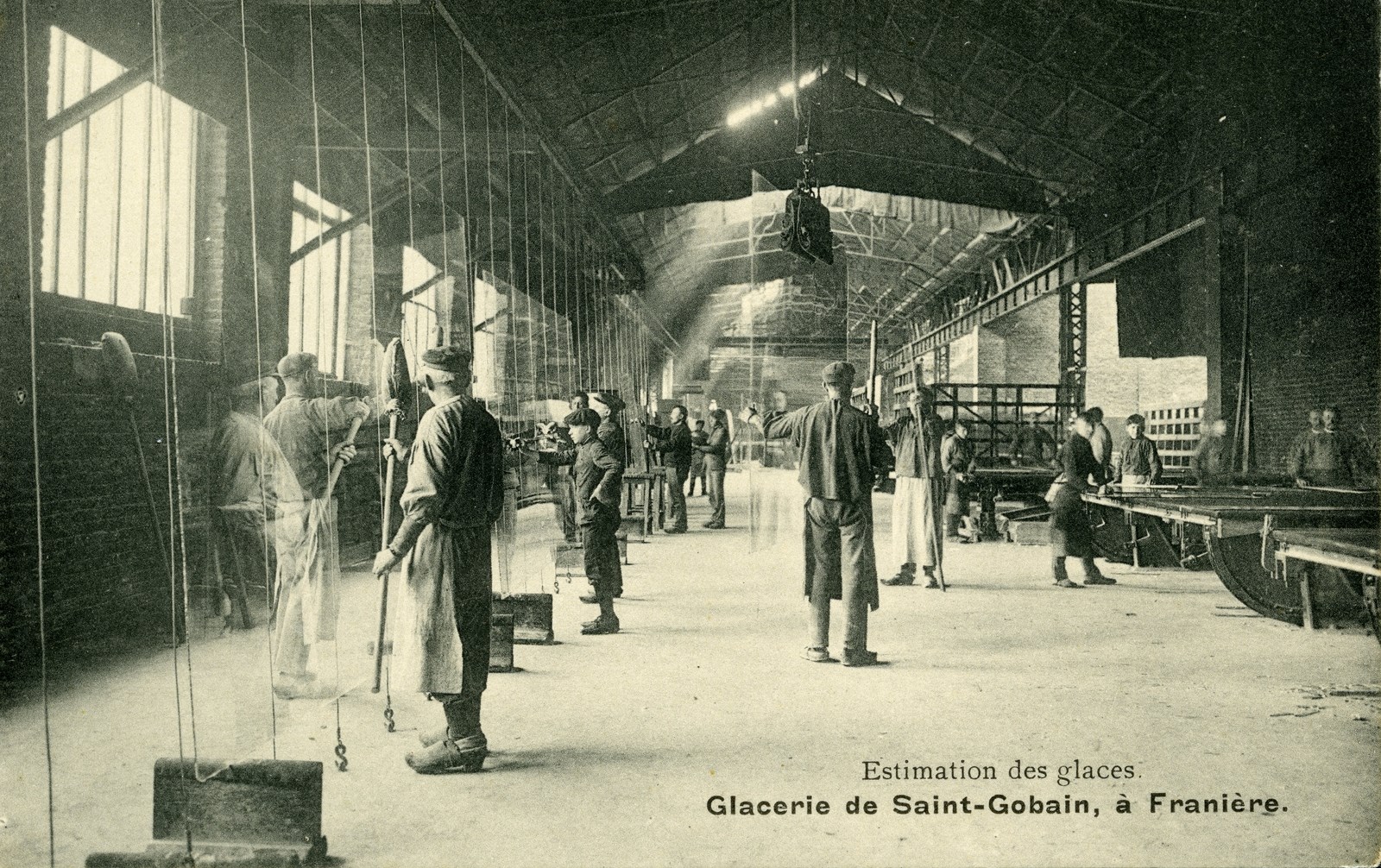 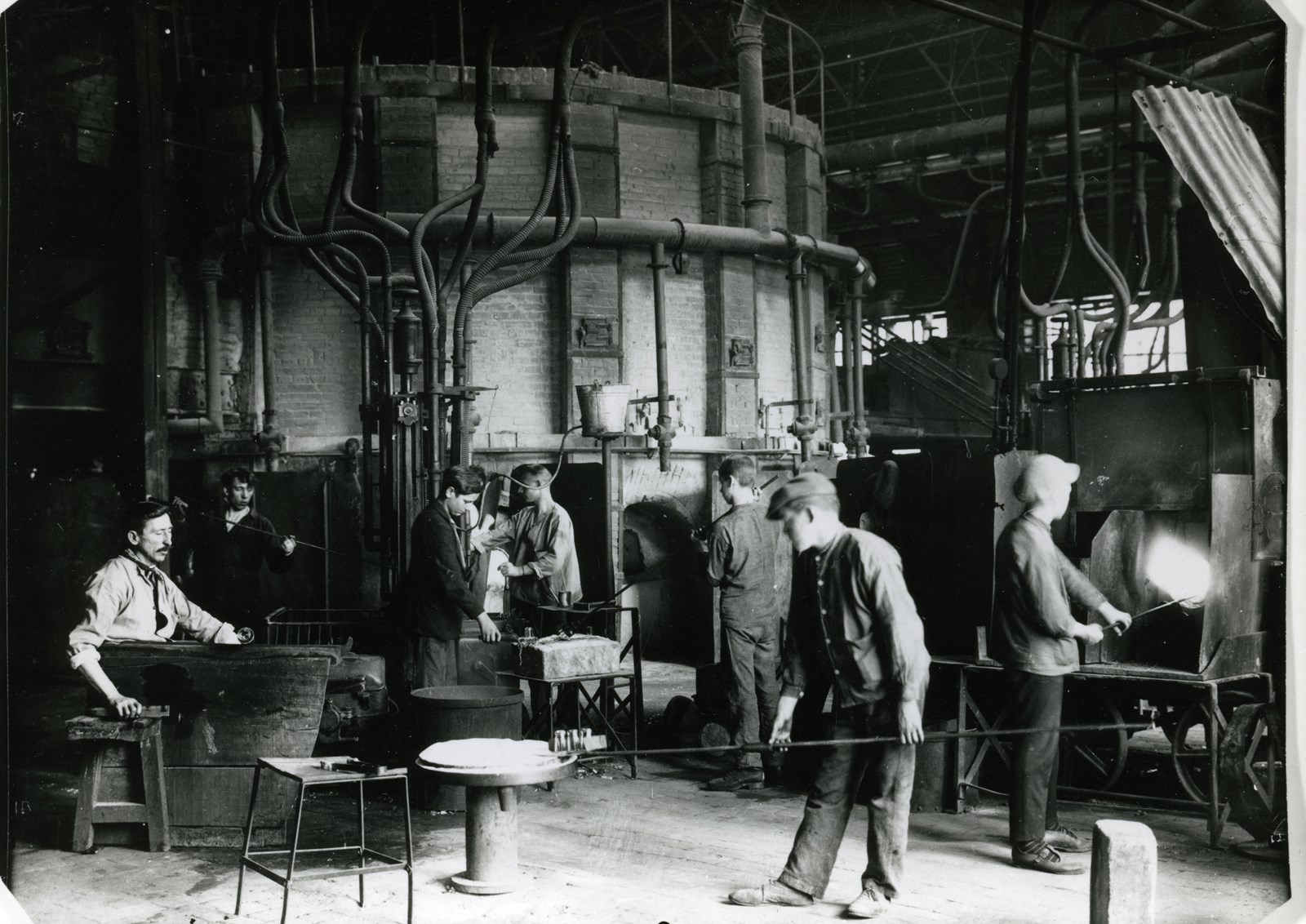 Val Saint-Lambert, view of a Boëtius furnace and glassmakers, 1904

While Val Saint-Lambert has captured the lion’s share in the history of our crystal manufacturers, we must not forget its sister companies which no longer exist, or the big household glass companies in the Central Region and along the Sambre and Meuse, which did not always content themselves with making everyday glass.

Everyday glass these days is manufactured entirely automatically, but the Val maintains the noble artisanal traditions of fashioning and decorating glass and crystal (free blowing or using a mould, complex mouldings, applications or inclusions carried out while the glass is hot, chasing, wheel-engraving and acid etching, cutting, enamelling, gilding, etc.).

Over the centuries, many different types of glass vessel have evolved: bottles, flasks, pots and vials, all guaranteeing that products are preserved and retain their authenticity. Although there are still a few artisanal glassmakers and artist’s workshops which use the traditional techniques, with only minor improvements, 95% of mass production these days is fully automated.

Semi-automatic procedures for making hollow glass appeared around 1898, followed by full automation in 1920. They represent a transposition of mould blowing which applies both to glass for packaging and everyday tableware.

From the tank furnace, a feeder dispenses the correct amount of glass at regular intervals, and this is then pressed into the first mould, transferred to a second one for the compressed air to be blown in, and then annealed in a lehr. The finished glasses are then inspected and sent to the packing store or the screen printing line. 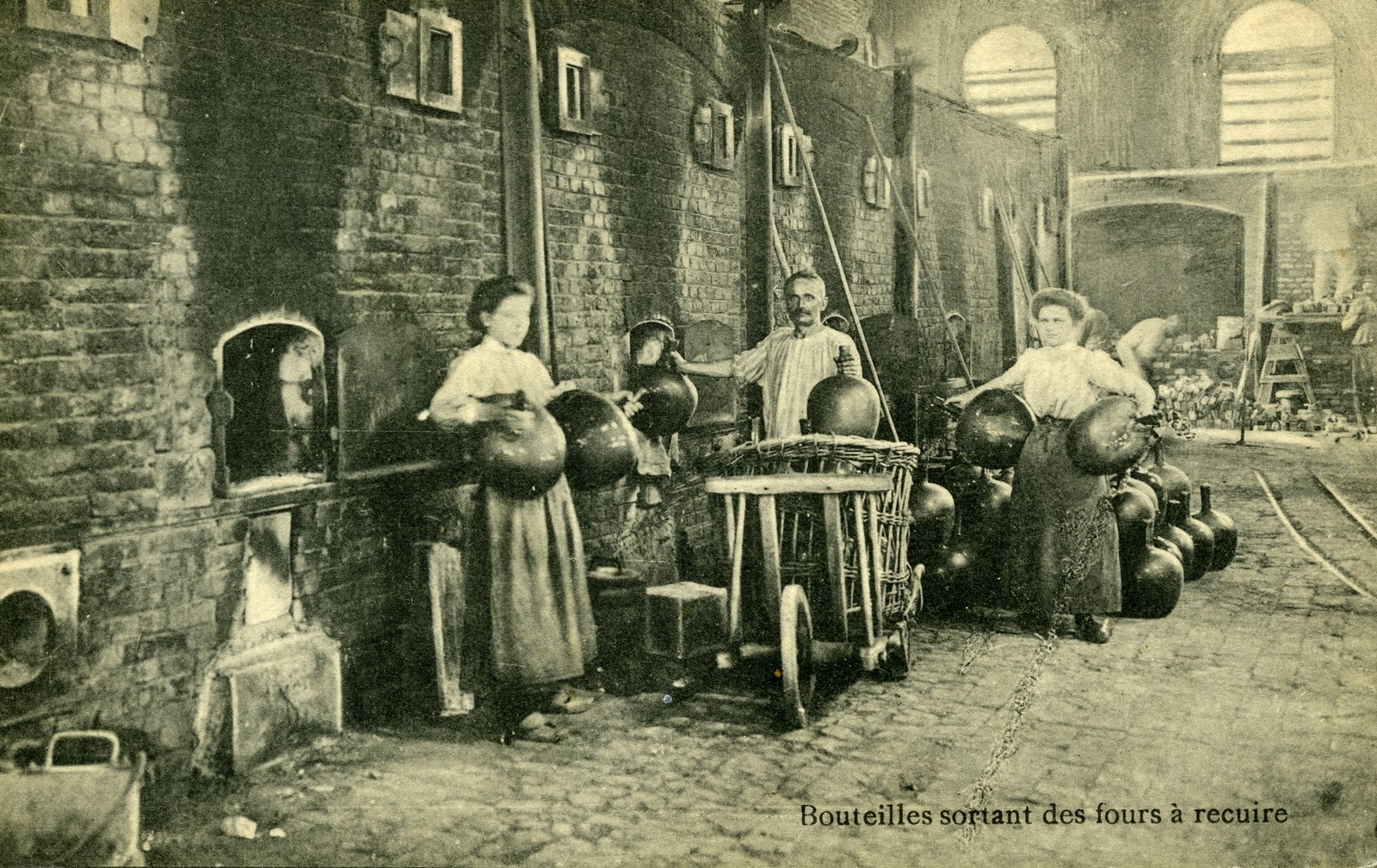 Carboys coming out of the annealing lehr at Verreries de Jumet, circa 1900 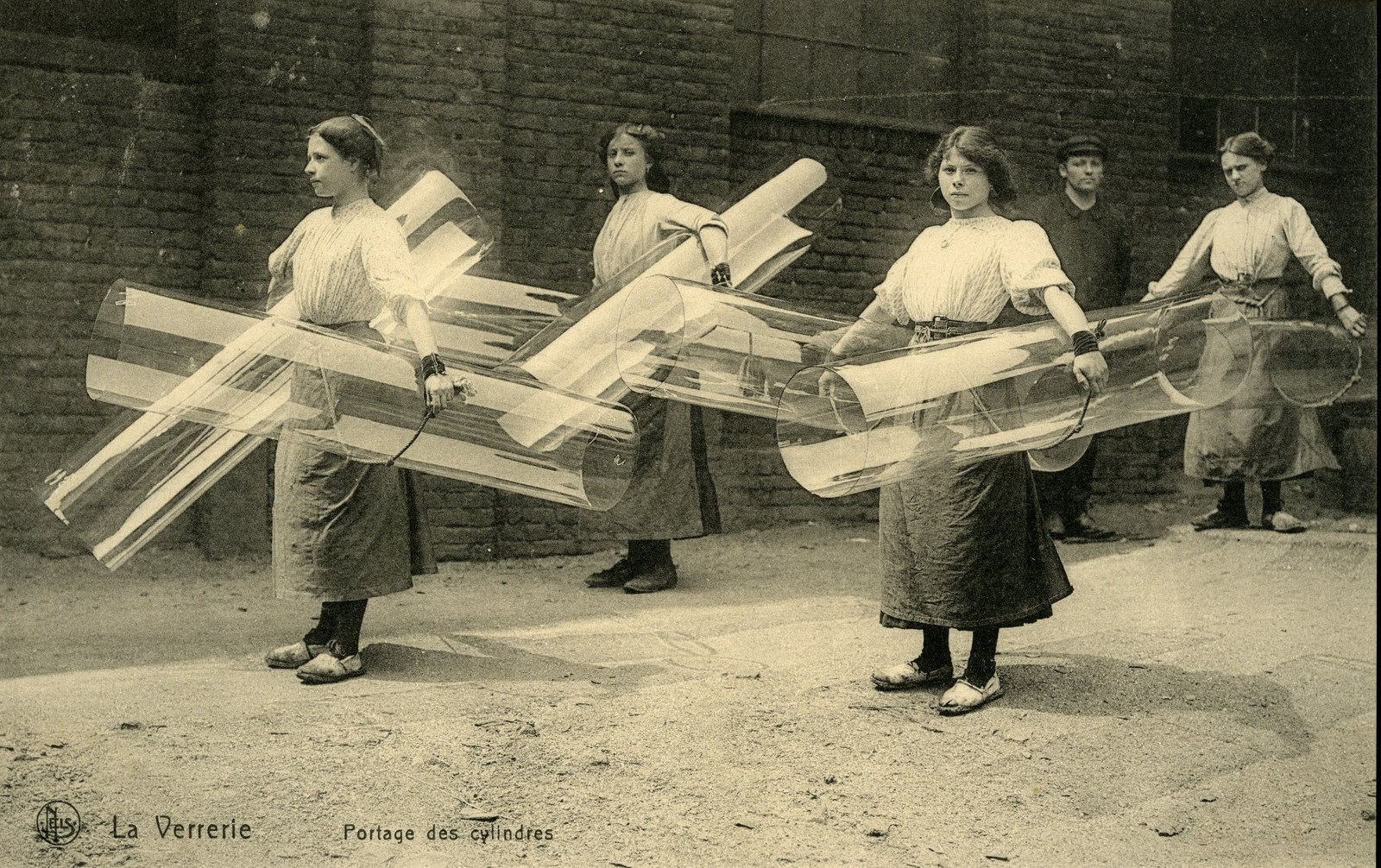 Window glass used to be blown in the shape of a circular plate or in cylinders.

The latter method, in a version which had been considerably improved in modern times, established itself in the 19th century.

This is the activity which brought prosperity to Charleroi, an obscure stronghold in the 17th century whose coal mining, metallurgy and glassmaking activities made it into one of the strategic centres of economic development by the 19th century.

The 1960s saw the float glass technique establishing itself globally.

Cannon or cylinder blowing is simple in principle, consisting of fashioning the glass by blowing a large cylinder or sleeve of glass, which is then cracked lengthwise and softened over heat to spread it. 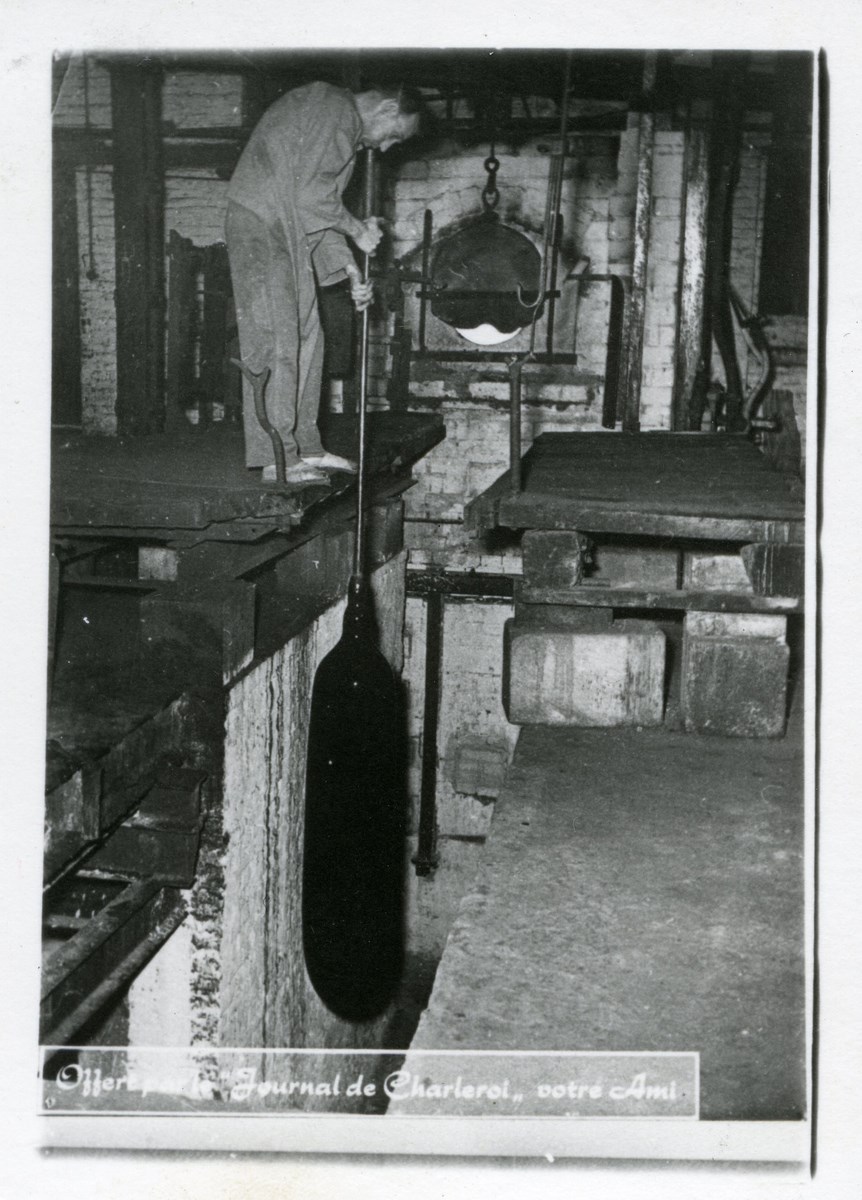 Blower swinging the cylinder over the trench, early 20th century 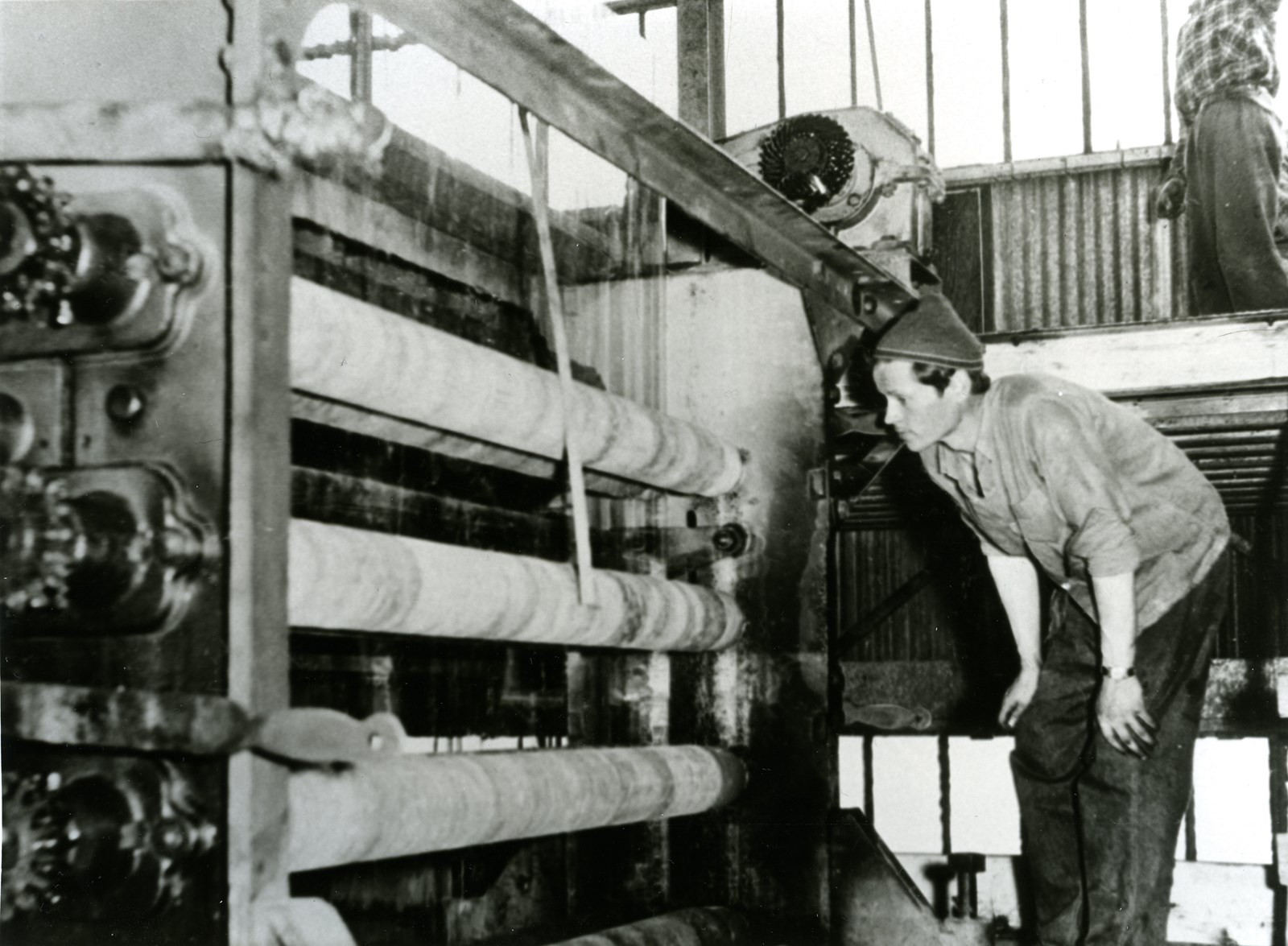 The ribbon of glass rises between the asbestos rollers, circa 1930

After some trials with mechanical cylinder blowing (USA, the Lubbers process), the very first patent for entirely mechanical drawing was granted in 1901 to engineers Gobbe and Fourcault.

The process, which was developed in the latter’s glassworks in Dampremy, spread around the world after the First World War.

The glass is collected in a start-up strand in the tank furnace and gradually cools down as it travels vertically in a pit.

The ‘recipe’ requires only one worker to hold the sheet as it emerges and another to cut it with a diamond. The patent went on to be refined in the United States under the name ‘Pittsburgh process’.

The Libbey-Owens variation on the Fourcault model emerged in the USA in 1915, but both would be supplanted by float glass.

In 1959, the English firm of Pilkingtons developed a revolutionary float glass procedure, which made it possible to make windows and mirrors of exceptional size and quality.

The molten glass is poured from a tank furnace on to a melted tin bath. The principle, which had already captured the interest of researchers in the 19th century, is based on the difference in density between the two liquids, which enables one to float on top of the other.

The glass sheet is then annealed and cut to size. 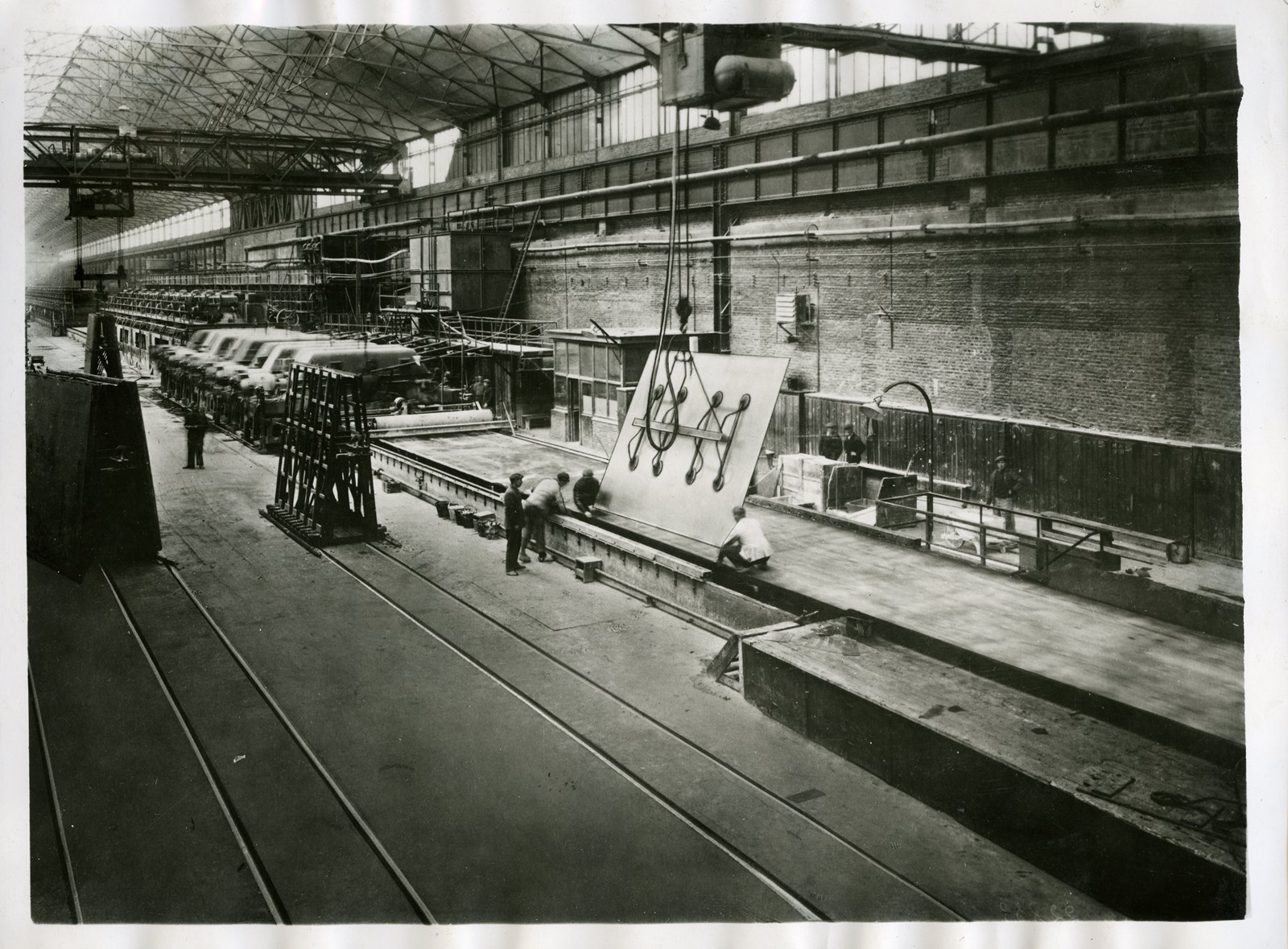 Manipulation of a sheet of glass for storing at the end of the float line, Glaceries de Moustiers-sur-Sambre, circa 1960 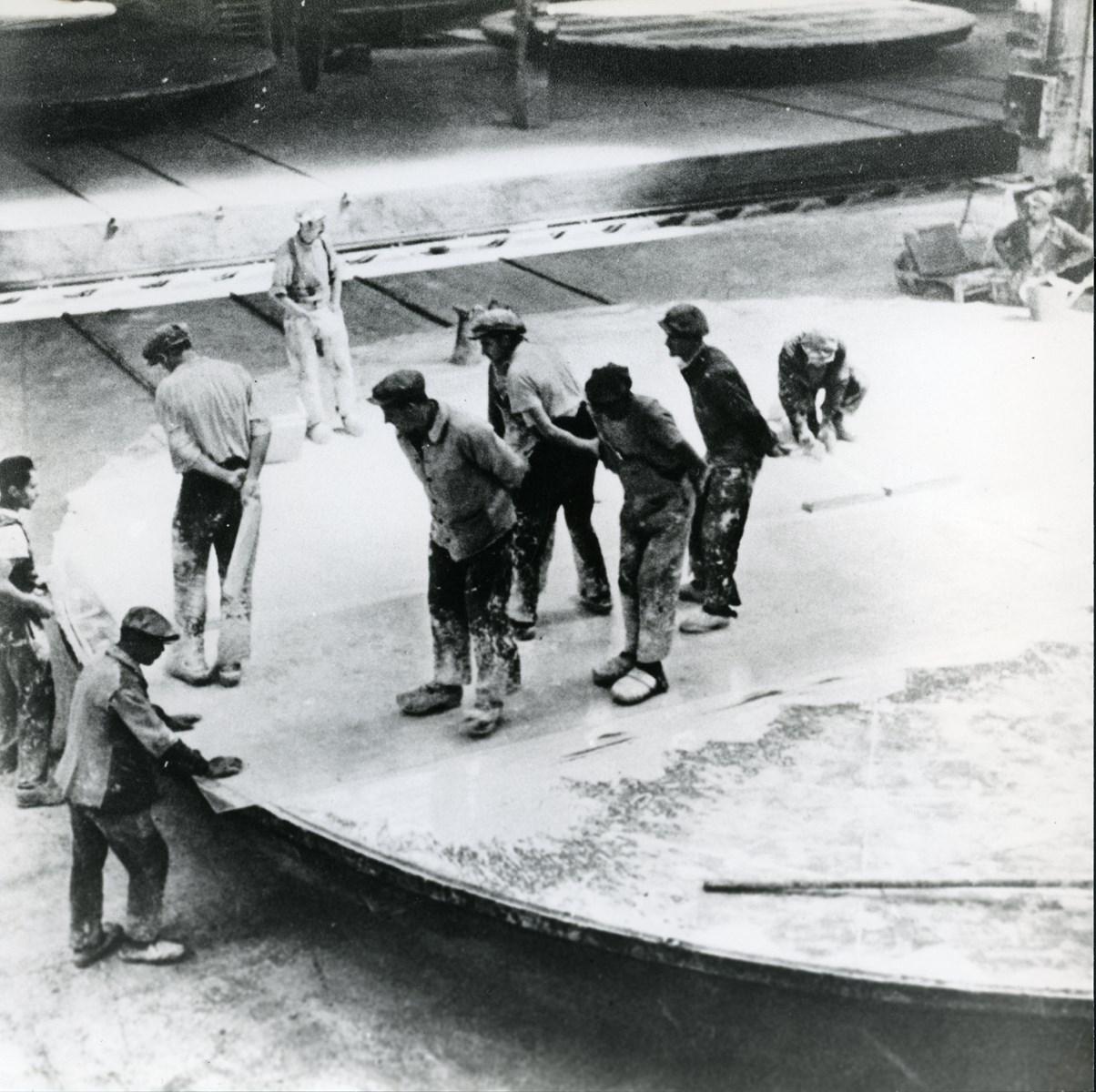 The sheets of glass are sealed before polishing, on large rotary tables. Probably Courcelles, circa 1910.

Mirrors were originally produced by blowing and then poured on a table, a process developed at the Manufacture Royale des Glaces de Saint-Gobain in about 1680: the molten glass was tipped on to a table and flattened out with a tool.

The resulting sheets, which still had irregular and non-parallel sides, then required laborious abrasion and polishing.

This process was superseded in the 1920s by laminating molten glass between two rollers.

These days, the float glass process is universally used for manufacturing mirrors: the point is that it does away with the need for any subsequent abrasion and finishing work.